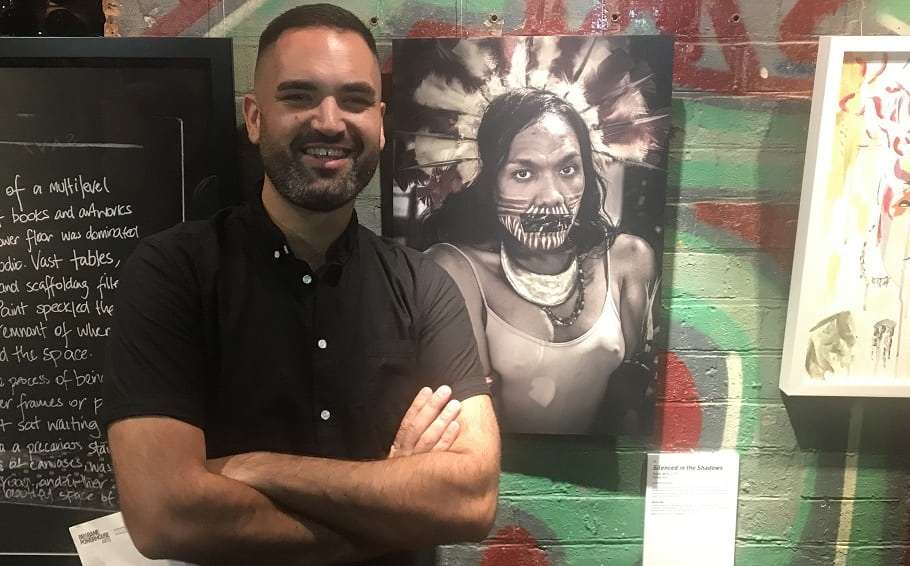 Judges have chosen a portrait depicting the internal struggle of LGBTIQ Pacific Islander people as winner of the MELT Festival Portrait Prize.

Brisbane photographer Dan Molloy’s Silenced in the Shadows was named Judge’s Choice at Brisbane Powerhouse on Friday night. He won a $1000 prize.

Molloy (pictured) photographed Stevie for the portrait, who identifies as LGBTIQ and is from the Pacific Islands. The portraits depicts “the emotional internal battle LGBTIQ+ Pacific Islander and Indigenous people often face.”

“The tape on the mouth represents being silenced and being stuck in a community and a culture where you can’t express your sexuality or gender identity,” Molloy told QN Magazine.

“Pacific Islander communities can have staunch cultural and religious beliefs. In particular, transgender people fear being ostracised and not accepted.

“You feel silenced and you can’t express yourself, just as when you’re gay and you’re in the closet.”

Molloy said the winning portrait is one of thirty photos from the same collection. He said he wants to exhibit them somewhere in Brisbane ahead of next year’s MELT Festival.

“Everyone we photographed on this day felt ostracised by their families or somebody in their lives,” he said. “We took a stand by taking some amazing photos and be seen and heard. Our stories are real. We’re real people.”

Twenty-one other MELT Portrait Prize finalists are on display throughout the Brisbane Powerhouse.

Organisers will announce the People’s Choice winner, voted on by patrons at the venue, at the end of the MELT Festival.